I've always enjoyed this sort of thing. Making miniatures, I mean, not Judaising Barbie, that's just a side-effect. These days, now I have a scanner and a super-duper colour printer, it's so easy...back in the days of dot-matrix printers, you had to find little images in magazines and flyers and so on, and there was always a certain sense of glee when you found something you could turn into a miniature. Now, I want to make a box of matzah, I can just scan a box of matzah...

Anyway, this is Passover Barbie. She eats Streit's matzah, and not just because it's pink.

To make your own box of Barbie matzah you will need:
Measure, mark, and cut four pieces of corrugated cardboard 30mm*27mm. Tape them together in a bundle. These are your matzot (hahaha, insert matzah/cardboard joke of choice here).

Print and cut out the scanned wrapper. You can see where the folds would be in real life - fold along those. Pre-folding it makes wrapping the cardboard matzah in its wrapper much easier; it is a bit fiddly. Wrap it up; glue the wrapper into place as you go, or you can tape it if you're careful to tape the whole box evenly all over (if you don't, it just looks a bit silly). The 27mm is the vertical dimension, but you probably figured that out already.

I don't want to take commissions for these...I appreciate that not everyone has hands that can do fiddlies, but as fiddlies go it's quite an easy one, so there are lots of people out there who can do it, and chances are you know one of them.

If you hate the cat on your Tefillin Barbie, you can soak it off with acetone. Acetone is most easily obtainable as nail polish remover. Get the cat good and wet, give it a couple of minutes, and then scrape it off.

If you're thinking of going as Tefillin Barbie this Purim

If you were going as a Torah reader, you wouldn't use a real Torah. Torahs are holy objects. Tefillin are also holy objects.

Please, if you're dressing up as someone wearing tefillin, make some fake tefillin with some cardboard, black paint, and ribbon.

Do women in your community wear tefillin and tallit when they pray? Do you? For many, the relationship between gender and ritual garb is still evolving, as women and men consider their personal and communal associations with these objects and practices. This edition of Go & Learn uses the provocative image of "Tefillin Barbie" – created in 2006 by soferet (ritual scribe) Jen Taylor Friedman – to explore issues of gender, ritual, and body image.

We have created 3 lesson plans based on "Tefillin Barbie."

The rest of it's rather impressive, as well. I'm entirely charmed by the JWA's choosing to use my work as a springboard for discussing some really fundamental issues. 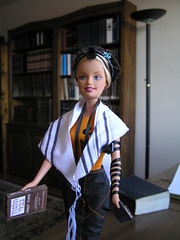 I often get asked "Do you think women should wear tefillin?"

All Jewish women? No. Tefillin are traditionally a men's thing; there are plenty of communities where gender roles are still rigidly defined and those communities are quite happy that way. Expecting these women to wear tefillin would be an alien cultural imposition. It would be like saying that Europeans should observe Thanksgiving - absolutely, ridiculously, acontextual.

All Jewish women in communities where gender roles are not so rigidly defined? Likewise no. There are plenty of egalitarian communities where the language of "should" is inappropriate. Any community which does not define itself as bound by the halakhic system will view the wearing of tefillin as optional. Expecting women or men in these communities to wear tefillin is akin to saying that Americans should celebrate Hallowe'en - clearly an inappropriate expectation since Hallowe'en is optional. It's not your place or mine to pass comment on whether someone should dress up and pass out candy, and likewise it's not our place to comment on whether someone who doesn't see himself as bound by commandments should be observing this particular aspect of ritual commandment. Whether he does or whether he doesn't, his choice is legitimate and deserves respect.

In communities which are professedly egalitarian and bound by halakha? Yes, I think women in these communities should be expected to wear tefillin.

The present practice of having egalitarian prayer but only expecting men to wear tefillin is shameful. The message is either that tefillin do not matter, which in a professedly halakhic community is resoundingly inappropriate, or that egalitarianism has different requirements for men and for women, which devalues egalitarianism.

So yes, in communities which accept halakha - including as it does the commandment to wear tefillin - as binding, and which aspire to accord equal rights and responsibilities to men and to women, I think that women should wear tefillin. The alternative is an egalitarianism which not only devalues egalitarianism but devalues Judaism, by demonstrating that egalitarianism is not much more than a feeble sop to women's feelings, and a sop, at that, obtained by discarding ritual structure.

By tacitly exempting women from wearing tefillin, these communities admit that the women do not really have the same communal status as men, since all rights come with attendant responsibilities, and in any community responsibility is what is significant in the long term. If we exempt women but wish everyone to be equal, everyone must be exempt, which says that tefillin - and by extension all commandments, which form the underlying structure of this community's Judaism - can be dispensed with. Egalitarianism is at best a fundamental development which elevates women to the same societal plane as men. This egalitarianism produces only the illusion of elevation, or levels the planes by razing the structure.

I happen to fall in the segment of the Jewish world which wants to retain halakhic structure, but wishes to see men and women as comparable elements of that structure, which is to say having comparable responsibilities and rights. Whom we expect to wear tefillin is illustrative of how we are choosing to value the one against the other. If we expect women to wear tefillin, and apply a similar attitude to other aspects of both egalitarianism and halakha, we will be further towards creating a strong halakhic structure through which both men and women may move freely. This is the context in which I think women should wear tefillin.

Cloning - it's the new thing. Never be one short of a minyan, ever again! 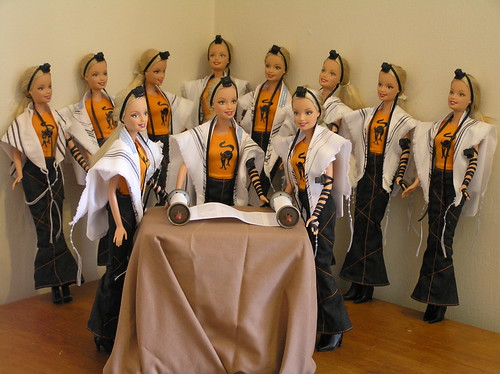 Well, if you're making a zillion Barbies, you might as well have a bit of fun, right?

There are wee tallitot and tefillin and Torahs all over my desk. I am very busy doing Barbies, and I want toast for lunch because it is fast. But I haven't had time to wash and put away the Pesach dishes and turn the kitchen back to normal, because that takes a long time and I am busy. This means that toast is out of the question and I have to keep eating damn matzah, even though it's not Pesach any more. This irritates me. However, now I am going out to purchase a hacksaw, which will be satisfying. I could use it to cut the matzah.

Yay tefillin donations! Someone went to look at Barbie, and had a sniff round my site, and offered to donate his old tefillin to my women's tefillin gemach. Isn't that nice?

A gemach is a charity which lends things to people in need. Sometimes it's basic stuff like plates, sometimes it's wedding dresses, sometimes it's furniture, and sometimes it's tefillin. Men who can't afford tefillin can borrow some from a tefillin gemach for as long as they need them. But women can't, because gemachen don't exist in the liberal Jewish movements (so far as I know) and the liberal movements are the only places where they're interested in women laying tefillin. Bit of a bind, as it were. So I'm working on doing something about it. Slowly, as yet, but working on it. And lovely people who donate tefillin completely out of the blue are a vital component.