your student doesn’t finish her first sefer Torah every day

My beloved student Julie has been writing a Torah in San Francisco at the Contemporary Jewish Museum for the past year, and once she’d finished writing (yay) it came time to sew it together and have a bit of an Event.

So I went out there to help with the sewing and to be part of the Event, because your student doesn’t finish her first sefer Torah every day. I mean wow, seriously.

And I learned…that sewing a Torah together is a lot more fun when there’s two of you doing it. (Here’s a description of sewing a Torah.) It’s pretty fun anyway, but it’s even better when shared.

First we took awls and punched holes down the edges.

Then we took burnishers and folded over one edge.

Then we sorted all the sheets into order.

Then we each took part of the pile

laid two sheets right sides together (this is Sewing 101)

checked that they were the CORRECT two sheets (this is Sewing 101 section 1.1.1)

knotted off the threads

and rolled the new sheet up

until there was a whole Torah

where before there had been a pile of sheets of parchment.

The museum isn’t a shul. It doesn’t have Torah readings. But don’t you think it’s awfully sad to write a whole Torah and then not have it read from? Julie did, and so did the museum. So they arranged for the Torah to visit Netivot Shalom in Berkeley, and on Shabbat we read from it.

Now, the funny thing is, that you write a Torah, and everyone involved is all, whoop-de-hey! amazingcakes! spiffettydoo!, but once you’re reading from it, it’s just like any other Torah. Kind of like pouring water into a lake. The water you’re pouring may be terribly special to you, but once you pour it into the lake, it’s part of the lake, and it doesn’t matter that once it was your special water. It becomes essentially anonymous, just part of the greater body.

No-one would know, to look at it, unless you told them that it was your special Torah. It acquires a life of its own, independent of you (it’s not a mixed metaphor if you start a new paragraph, right?). It’s rather beautiful, in a funny sort of way. 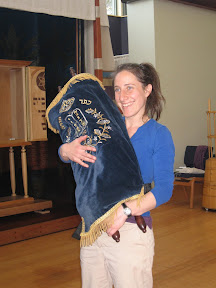 Julie looking slightly surprised, rather relieved, and altogether joyful to have written a Torah.

This entry also appears at http://hatam-soferet.dreamwidth.org/649885.html.

people have commented there, and you're welcome to join them. I've disabled LJ comments for the time being because of excessive spam.
Tags: feminism, jewish identity, la vie soferet, presenting, safrut, sewing, soferot, torah, torah scrolls
Subscribe
Comments for this post were disabled by the author